We know Punta Gordans love veterans but back in 1963 the TV show Route 66 told the world a different story in an episode titled Shadows of an Afternoon (season 3, episode 30).

An important parallel plot line of Shadows of an Afternoon has to do with war heroes.

A reporter asks the sheriff’s deputy where Lincoln Case is from and convinces the deputy to call Llano, Texas for information about Linc. The deputy learns that Linc is a “war hero”.

From then on Lincoln Case is pejoratively referred to as “war hero” with a sneer by the suspicious reporter. 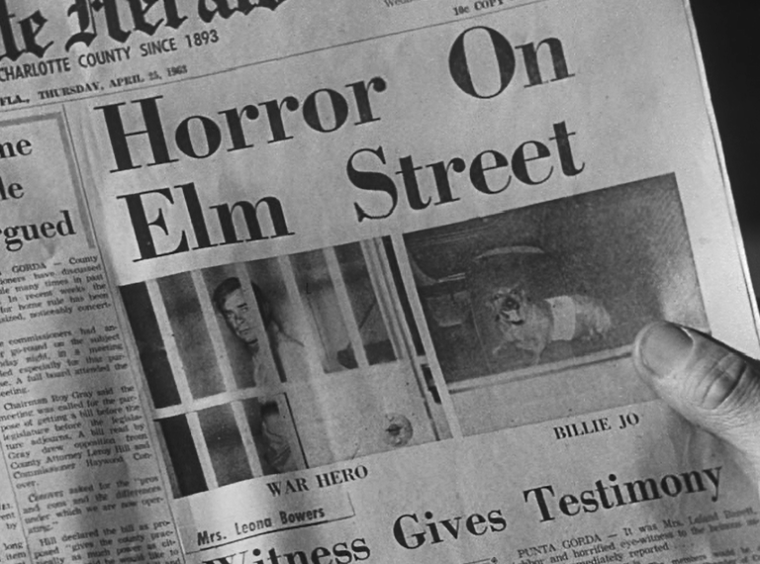 Lawyer Parker Smith counsels Linc, “This town and all the people in it … the things they think they know about war heroes because of what they read in those little magazines, how they come home and can go crazy right in the middle of a rose garden maybe because the sun is just a little too hot.”

Furthermore, “any jury we impanel from the brain-washed citizens of this county could hand you the death sentence – if the law’d let ’em.”

Lawyer Parker Smith is himself a war veteran

Parker Smith says, “I know all about heroes, Mr. Case.”

“Wood, gentlemen. 100% steel-reinforced wood. Don’t tell me I don’t know anything about heroes. When I came limping home, people who wouldn’t give me the time of day couldn’t do enough for me. They gave me a soft job, sent me back to school and paid my way. Then one day I hung a shingle out above my door, and I had a profitable law practice going.”

“They love me in this town. Everybody loves a hero. Didn’t you know that? Why, I’ll have the whole county sobbing for Lincoln Case. They’ll forgive you anything. Even cutting up a dog. Plead guilty. Believe me, that’s the only chance you’ve got. I’m telling you, you got a gimmick. Use it.”

Leona claims to know about heroes too

Leona Bowers relates the story of her deceased husband. “He was a fine man, Leland Bowers … He died a hero on his own ship.”

However at the end of the show, in a painful and public confession, Leona releases the lie she’s lived for decades. 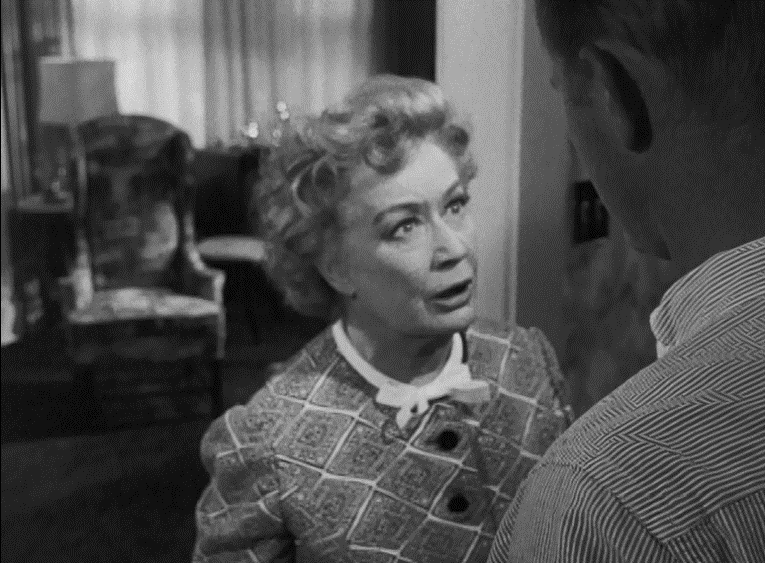 The role of “the best lawyer in town” is portrayed by actor Ralph Meeker. A music major from Northwestern University, Ralph Meeker studied method acting in New York City.

He served in the Navy during WWII but was discharged from active duty after being injured. Meeker went overseas to demonstrate his support for the troops as a member of the USO.

A tall man, over 6 feet, Meeker was cast in “macho” roles calling for characters described as “hard-nosed” or “burly” and often playing the role of a cop or a criminal.

He had a long career spanning almost three decades from 1951 to 1979, in which he remained in demand on stage, screen and television.

The role of  Charlotte County prosecutor is played by actor Richard Mulligan, probably best known as Burt Campbell, patriarch from the TV sitcom Soap. He later starred in Empty Nest. He appeared in 28 films and numerous television shows including I Dream of Jeannie, Mannix, Bonanza and Love Boat.

Contrary to the unfriendly image of Punta Gorda presented in Shadows of an Afternoon, the people of Punta Gorda honor Vietnam veterans. In fact, our town has it’s own Vietnam Veterans Memorial Wall, a replica of the one in Washington, DC.

As you can see in the following charts and stats provided by World Population Review and based on the latest census reports, Charlotte County is home to a large population of Vietnam veterans. 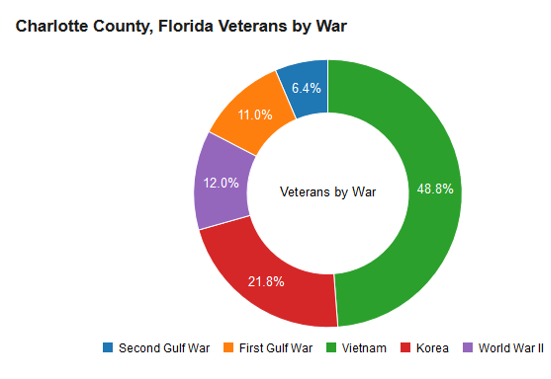 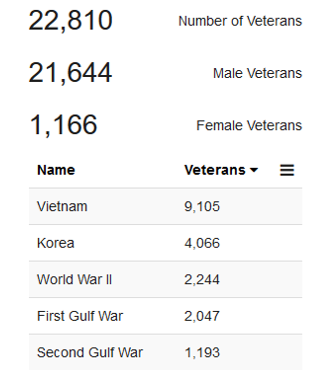 David Obermier of Charlotte Memorial Funeral Home was involved in Vietnam Veterans Memorial project. It started when someone saw that the traveling Vietnam memorial wall was for sale in Texas. David Donahue of the local veteran’s office placed an ad looking for other people who might be interested in buying that wall. A Charlotte County committee chaired by Rick Tuss was formed and funds were raised to build our own brand-new wall here. David O. was on the committee which procured the granite. It comes from the same mountain in Bangalore, India – which is highly prized for it’s reflective quality – that produced the granite for the wall in Washington DC. The etching process of photoemulsion and sandblasting was also carefully detailed to be sure the etching would be conducive to pencil rubbings. 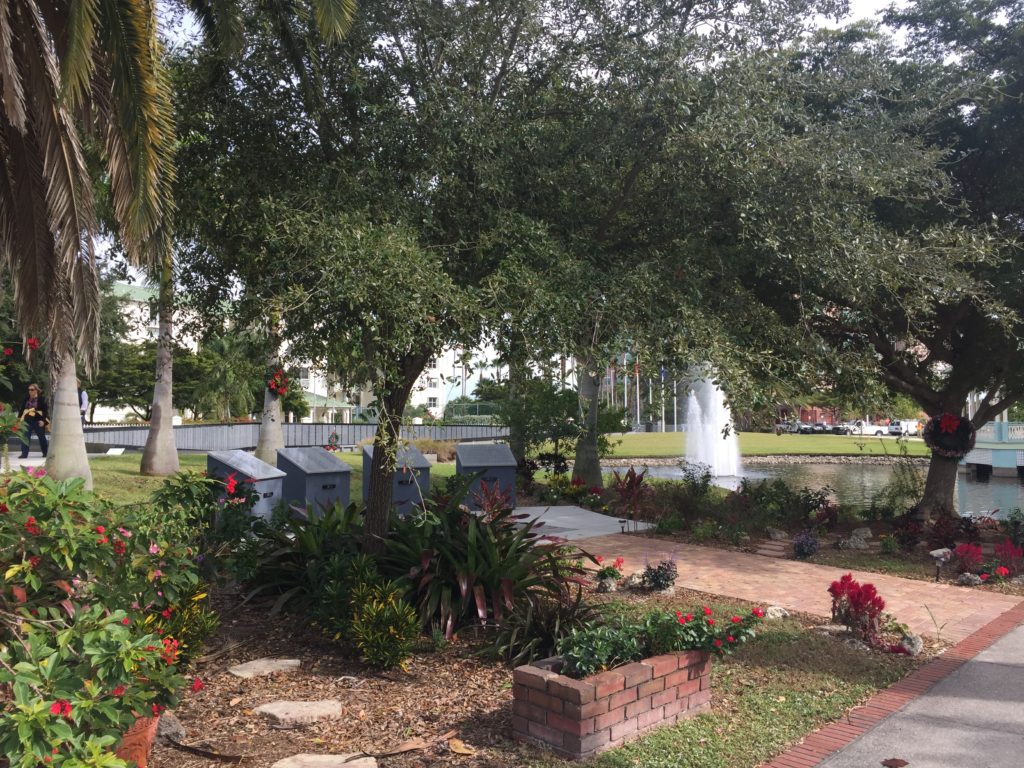 Having secured temporary jobs, but unable to find lodging, Tod and Linc agree to house-sit for Mrs. Lindstrom while she is out of town in exchange for taking care of her dachshund Billie Jo, and maintaining the lawn and garden. Within four weeks, Linc is arrested for maliciously injuring the dog, based on the accusation of an eccentric, elderly neighbor who claims to have witnessed it. Considered to be one of the best from Season 3, this episode is more of a character study than a crime story. It was filmed on location in Punta Gorda. Supporting cast features Ralph Meeker, veteran screen and stage actress Miriam Hopkins, beauty Kathryn Hays, and extras from the local community. 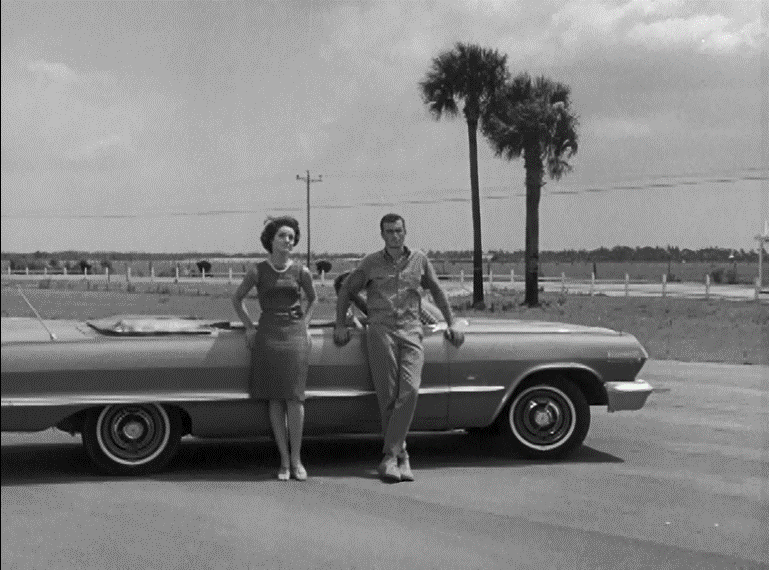 About the show Route 66

Two socially conscious young adventurers explore the US during the turbulent 1960s. Tod, played by Martin Milner, is the son of a wealthy NY businessman who grew up in privilege. After his father’s death he is left penniless except for his Corvette. In this episode, his traveling partner is Linc, a US Army veteran looking for purpose after completing his military service. Linc’s role is portrayed by Glenn Corbett.

This is the only fiction TV series shot on location in 40 of the 50 States. Many episodes, like the one we’re viewing today, were filmed in areas where Route 66 did not travel. Each of the 116 one-hour episodes is a complete story, making the series an anthology which reflected on the intimate personal problems of the characters encountered by the show’s protagonists. This series was known for the sometimes trite story lines offset with existentialist philosophy and often surprisingly profound dialogue. Enjoy the amusing beat-era language, ubiquitous fist fights, and high quality on-location film production.

Also known as The Mother Road, Main Street of America and Will Rogers Memorial Highway, Route 66 originally started in Chicago, traversed Missouri, Oklahoma, Texas, New Mexico, Arizona and ended in Santa Monica, CA. Designated Route 66 in 1926, it was the primary route taken by ‘Okies’ in the 1930s, fleeing the Dust Bowl environmental and economic disaster. Much of Route 66 was not paved until as late as 1938.

We point out one of the houses featured in this episode of Route 66 on our Haunted History of Punta Gorda Walking Tour and we visit the Vietnam Veterans Memorial Wall on our Food and Pub Tours.