Marian McAdow and her best friend Sadie Farrington were known as The Lady Seers.

An article published in the New York Times on Sunday, November 29, 1908 – 110 years ago – features a letter written by Judge Francis Kemper Adams of Punta Gorda to the Metropolitan Psychical Society. 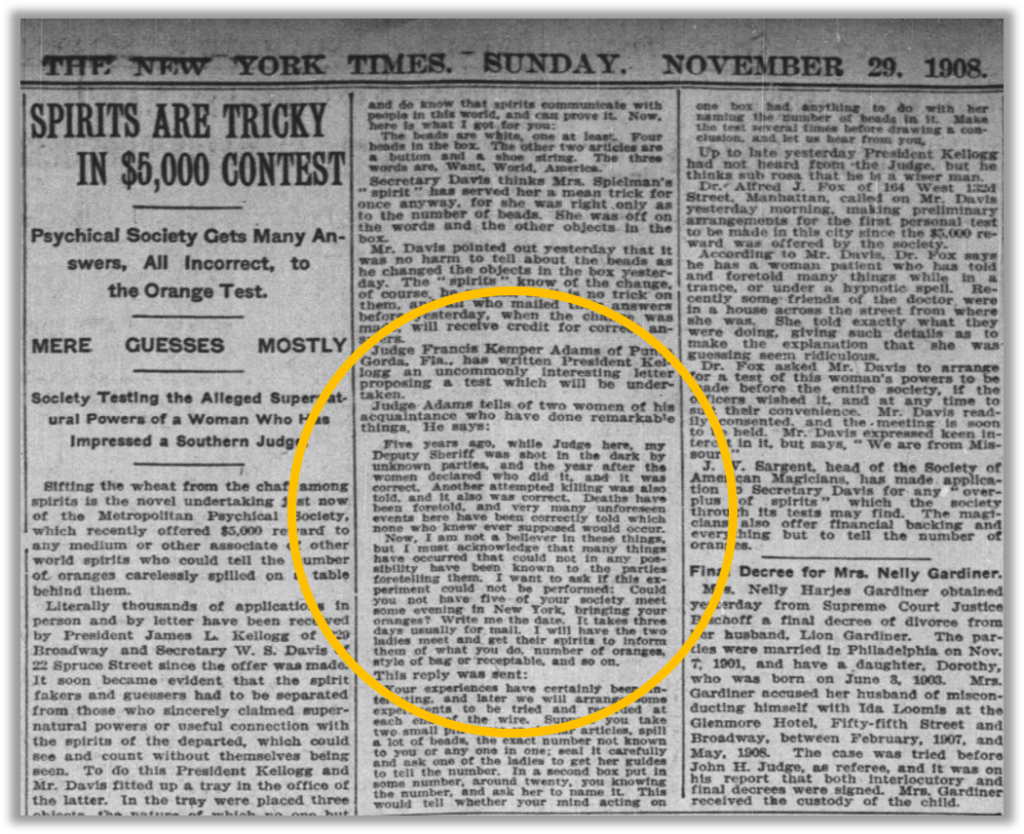 “Judge Adams tells of two women of his acquaintance who have done remarkable things. He says: Five years ago, while Judge here, my Deputy Sheriff was shot in the dark by unknown parties, and the year after the women declared who did it, and it was correct. Another attempted killing was also told, and it also was correct. Deaths have been foretold, and very many unforeseen events here have been correctly told which none who knew ever supposed could occur. Now, I am not a believer in these things, but I must acknowledge that many things have occurred that could not in any possibility have been known to the parties foretelling them. I want to ask if this experiment could not be performed: Could you not have five of your society meet some evening in New York, bringing your oranges? Write me the date. It takes three days usually for the mail. I will have the two ladies meet and get their spirits to inform them of what you do, number of oranges, style of bag or receptacle, and so on.”

The Deputy Sheriff noted by Judge Adams would have been Marshal John Bowman and the other attempted killing was the shooting of Albert Dewey. Dewey survived but lost his leg.

Lindsey Williams and U.S. Cleveland wrote that Perry and Marian McAdow were fascinated with spiritualism which caused some Punta Gorda citizens to feel apprehensive. The McAdows “had made a pact that the first to die would tilt a picture hanging in the hallway if there was an afterlife.” It was a painting Marian herself had done of the original cabin previously occupied by the Laniers and the Trabues. The cabin was demolished and McAdow Hall was built on the site. 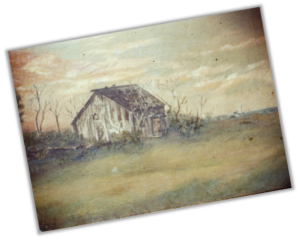 According to Williams and Cleveland, “Marian was a vigorous, smart and strong-willed woman with many interests. She owned a camera when they were rare, and developed her own photographs. Becoming interested in spiritualism, she tried to photograph ghosts.” 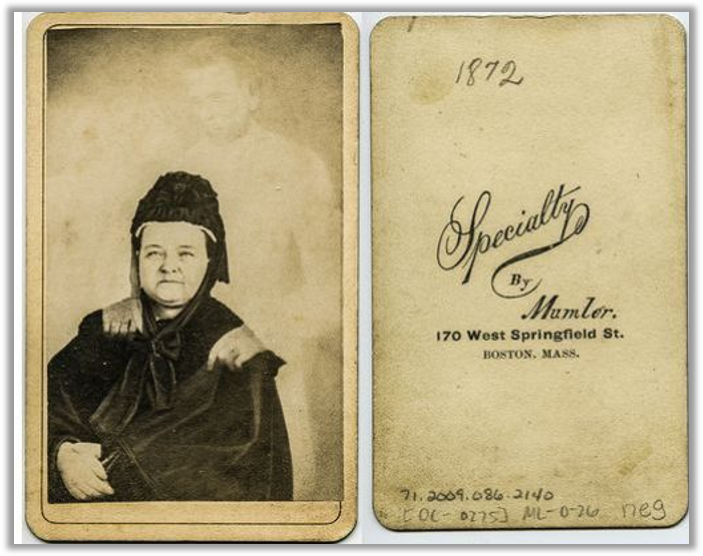 Mumler was later sued for fraud. Among those testifying against him was none other than P.T. Barnum who claimed Mumler was taking advantage of people in their grief. It was finally proven that he created the ghost photographs with double exposures.

Spiritualism in the United States peaked from the 1840s to the 1920s. It was, and is still considered a religious movement, although there is no formal church organization. It really took off in the United States after the Civil War as grieving family members mourned their lost sons, husbands, fathers and brothers, and found solace in the hope that they could communicate with their loved ones beyond the grave.

What do Spiritualists believe?

1. We believe in Infinite Intelligence.

2. We believe that the phenomena of Nature, both physical and spiritual, are the expression of Infinite Intelligence.

3. We affirm that a correct understanding of such expression and living in accordance therewith, constitute true religion.

4. We affirm that the existence and personal identity of the individual continue after the change called death.

5. We affirm that communication with the so-called dead is a fact, scientifically proven by the phenomena of Spiritualism.

6. We believe that the highest morality is contained in the Golden Rule: “Do unto others as you would have them do unto you.”

7. We affirm the moral responsibility of individuals and that we make our own happiness or unhappiness as we obey or disobey Nature’s physical and spiritual laws.

8. We affirm that the doorway to reformation is never closed against any soul here or hereafter.

9. We affirm that the precepts of Prophecy and Healing are Divine attributes proven through Mediumship.

This is one story about the McAdows. Learn more about them on our Haunted History of Punta Gorda Walking Tour.

This imagined scene of Sadie Farrington and Marion McAdow holding a séance was created by Simona Molino of Janas Studio Artistico in Italy. Janas is a fairy whose magic flights take her to starry skies and silvery seas. She inspires Simona’s fantasy artwork of memorable characters illustrated in rich colors and scrupulous detail.