Kate “Sissie” Dick was an early resident of the new town of Punta Gorda. She came to Punta Gorda along with her parents, John and Amanda Dick, and her many siblings. The family traveled from Texas to Punta Gorda in a covered wagon.

Katie worked as the assistant postmaster and married Alfred Sloan on Halloween 1888 at the age of 22. The young couple moved to a home on Alligator Creek across from Indian Spring Cemetery. In 1889 they had their first daughter, Celia. Within two years of wedded bliss, Katie was pregnant with their second child. 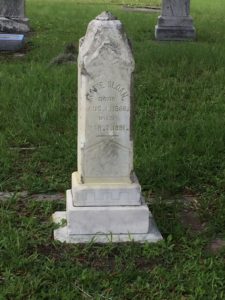 One lovely spring day, Katie was attacked by a vicious dog. It mauled her to death, right there in the streets of Punta Gorda!

Katie and her unborn baby were buried separately which seems to indicate the baby had been ripped from Katie’s womb during the grisly attack.

Not an Isolated Incident

As horrific and unlikely it might seem for a young pregnant woman to be attacked or killed by a dog, it’s happened on other occasions. Here are a few recent examples: