Where Did Marshal Bowman’s Family Reside? 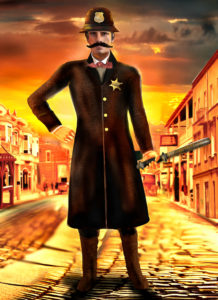 The exact location of the Bowman family home has been a source of speculation for years. Some have claimed the family lived on Taylor St. in either 321 Taylor St (formerly Two Thrifty Girls) or Pizza Gorda buildings.

We cannot find any evidence to support these claims, particularly since these homes date from the 1920s, at least 15 years after Marshal Bowman’s assassination.

Did they live where the court house stands today?

Historians U.S. Cleveland and Lindsey Williams claim the family lived on the site of today’s county courthouse, and many people continue to support this theory. Then again, some of us don’t. Let’s examine the statements from Lindsey Williams’s blog:

2. “First on the scene was State Representative Albert Gilchrist, the town’s most distinguished citizen who later became governor. A bachelor, he lived at the Dade Hotel just a half-block away on West Marion Street.”

The calaboose location is key

3. “Prisoners were locked in the ‘calaboose’ — a shed with a strap-iron cage built by a blacksmith and paid for by Trabue. It was located on an alley (now Herald Court) and behind Bowman’s house.”

Where was the livery stable?

4. “On the evening of the murder, several boys were playing around a stable being built across from Bowman’s house. Jimmy Cooper, son of County Assessor F.M. Cooper was on the stable roof in plain view of the Bowman residence.”

5. Reported the Punta Gorda Herald: “He saw the flash of the gun, heard the report and saw the murderer run through the stable to Sullivan Street …”

In this newspaper article from March 19, 1903, there’s an account of a suspect running from the scene. Many of the names and places jibe with the Census report of 1900.

This detail from the 1900 Census lists the Bowman family at house number 137, between Charles Schmidt and T.S. Morgan, and across the street from the Williams and the Swift families.

After thorough study of newspaper articles, census reports, books, and discussion with other local historians, it is my belief that the Bowman family lived in a large home which they owned, facing W. Olympia Avenue across the street from the private school and catty-corner to the Swift family. Based on the 1900 Census, other close neighbors include the William Demere and Tolbert Morgan families. The livery stable on what is now Herald Court and the calaboose were both located behind the house.

What do you think? I’d love to hear your thoughts!

Marshal Bowman’s dramatic portrait was created by Simona Molino of Janas Studio Artistico in Italy. Janas is a fairy whose magic flights take her to starry skies and silvery seas. She inspires Simona’s fantasy artwork of memorable characters illustrated in rich colors and scrupulous detail.