According to authors U.S. Cleveland and Lindsey Williams, Isaiah E. Cooper was convicted of Marshal Bowman’s assassination, but enough doubt existed that his scheduled execution was postponed three times, and ultimately when former Punta Gorda resident Albert Gilchrist was elected governor of Florida in 1908, he commuted Cooper’s death sentence to life in prison.

News accounts of the murder and trial

This researcher has found only two newspaper articles about the trial. “Bad for Cooper” and “State Rests After Making Out Very Strong Case of Circumstantial Evidence” imply he would be convicted.

An editorial in 1904 addressed the postponement of execution and expressed the disappointment of the town. The editorial begins, “The State Pardoning Board should not think that the people of Punta Gorda are blood-thirsty because they demand the execution of I.E. Cooper.” Citing more than 30 murders over a 14-year period in Punta Gorda, the writer describes the citizens as “outraged” and insinuate they would take matters into their own hands should the courts and State authorities fail to protect the people.

A 1908 Herald editorial speculated that newly-elected Governor Gilchrist would make sure the execution was carried out. “Two governors in succession have refused to hang Cooper; a third one may be trusted to do whatever he thinks is right.”

The Florida Department of Corrections does not have any records of Isaiah Cooper in the prison system. The Classification Records Analyst of the Florida Statewide Records Retention Center advised, “Upon diligent research I regret to inform you, unfortunately I am unable to locate any microfilm for the requested inmate: Cooper, Isaiah DC# UNKNOWN.“

The Officer Down Memorial Page for Marshal John Bowman does not name Isaiah Cooper as his assassin. It says “The suspect was arrested and sentenced to death but the sentence was later commuted to life.“

Esteemed local historian Vernon Peeples does not name a suspect in Marshal Bowman’s murder either. 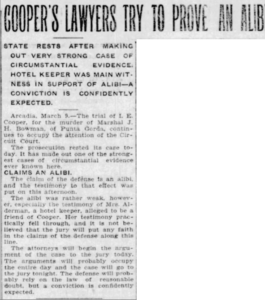 The subtitle of the news article says it all. “State rests after making out very strong case of circumstantial evidence.” By today’s standards, the circumstantial evidence leading to Isaiah Cooper’s conviction was very weak. The actual evidence strongly suggested otherwise. The bloodhounds brought from Arcadia to track the killer “led a search party to the railroad dock at the foot of King Street, a direction opposite that said taken by Cooper.“

In their book, U.S. Cleveland and Lindsey Williams, report “Several months later, a shot-gun, believed to be the murder weapon, was dredged from the harbor near the railroad dock.“

Punta Gordans were scared and angry. Someone who dared to shoot formidable Marshal Bowman would not hesitate to kill anyone in the town. They wanted the assassin captured and punished for this crime. Several people came forth to incriminate Isaiah Cooper, including the “lady seers” who conducted séances and named Isaiah Cooper as the perpetrator.

Isaiah Cooper maintained his innocence from the initial questioning and throughout the three execution orders. It is reported he yelled at the workers building the gallows saying:

In court he testified, “The Whitecaps killed the Marshal.“ 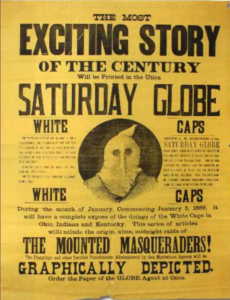 Whitecapping movement started in Indiana around 1837, as white males began forming secret societies in order to attempt to deliver what they considered justice on the frontier independent from the state. These groups became known as the ‘White Caps’. The first White Cap operations generally aimed at those who went against a community’s values. Men who neglected or abused their family, people who showed excessive laziness, and women who had children out of wedlock all were likely targets.”

Prior to his first scheduled execution, Isaiah Cooper gave his last statement as follows: “I am not guilty. I have never connived at, aided or abetted such a thing in my life. I am nearly 40 years old. In that time, I have never drawn blood from a man with a weapon or any description, not even a stick. Nor have I ever had a fight without it being forced on me. To hang me would be to commit a worse murder than has already been committed, for I will hold up my right hand to God and tell you that I did not kill Mr. Bowman, and had nothing to do with it. I do not know anything about it – except what I have been told. I was standing in George Alderman’s back yard, for I had left old man Alderman’s fire and gone into the dark to keep from being killed by the same mob that killed Mr. Bowman. My life is being stolen from me and from my wife and little children – wrongfully, forethoughtedly, willfully and without cause. I am guilty only of attending to my own business.”

The fact that Isaiah Cooper’s executions were postponed three times lends credence to the theory that he was wholly innocent of the crime. The governors who stayed his executions did not give explanations. The first suspension by Governor Jennings was loudly protested by the men of Punta Gorda who suggested they might lynch Cooper themselves. Governor Jennings replied by telegram: “I do not feel called upon to make an explanation of the performance of public duty but do not object to saying the pardoning board heard counsel for Cooper until a late hour yesterday evening. I gave further hearing until 11 o’clock last night. New matters presented at 9:45 this morning were deemed proper for the board to consider. Therefore it became necessary to annul the warrant.“

When Albert Gilchrist was elected Governor of Florida in 1908, one of his first acts was to commute Isaiah Cooper’s sentence from death to life in prison.

Isaiah Cooper was sent to a State Prison in DeLand, and then leased as a laborer to a turpentine work camp. On September 2, 1913, he walked into a heavily flooded pine forest and kept walking. He was never seen again.

Who was Isaiah Cooper?

Born in 1864, Isaiah Cooper was the third child of Eli W. Cooper and Elizabeth Cooper. His siblings were Annie, Miles, Mary and Elmira.

Isaiah’s father was a farmer

We know the Coopers moved to Florida prior to 1863, because Civil War Records document that Eli enlisted in Company H, Florida 5th Cavalry Battalion on October 15, 1863 at age 39.

In 1880 the family lived in Precinct 1, Orange, Florida. Eli’s occupation was listed as orange planter. 16-year-old Isaiah attended school, as did his older sister Annie, brother Miles and sister Mary. Little sister Elmira had not yet learned to read and write.

The family lived next door to James and Lottie Cooper, and their 10-year-old son John. Since James’ father was from Alabama, these Coopers were possibly younger relatives.

In 1900, the Coopers were in their early 70’s and had been married 54 years! They shared their home with a boarder, Frank Lowry, in Seneca, Lake County, Florida, where Eli continued to farm.

Probably most disturbing of all is that Punta Gorda citizens slept easily at night believing Marshal Bowman’s murderer was in prison. In fact, most likely the true assassin was living among them the whole time!

Marshal Bowman’s dramatic portrait was created by Simona Molino of Janas Studio Artistico in Italy. Janas is a fairy whose magic flights take her to starry skies and silvery seas. She inspires Simona’s fantasy artwork of memorable characters illustrated in rich colors and scrupulous detail.