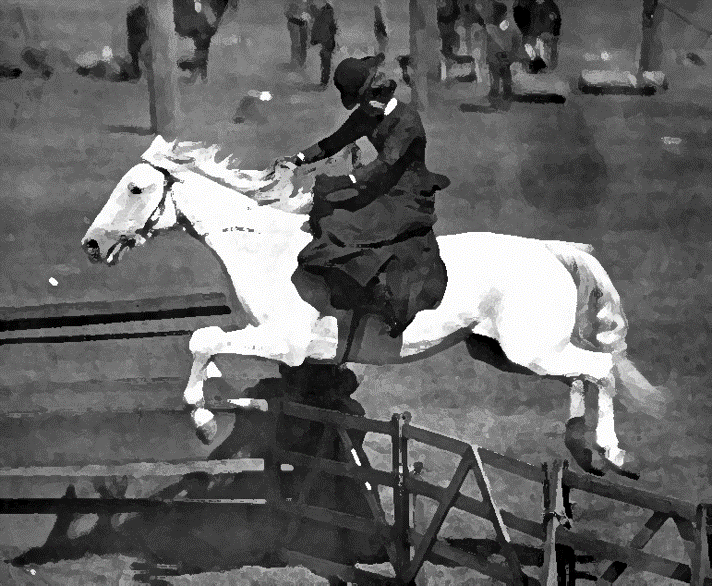 True history is endlessly fascinating to me. I was researching the Dick Family for my next book when a headline of a newspaper caught my attention. It had nothing to do with the matter at hand, but what a story! It’s our own American version of Romeo and Juliet.

The headline read, “Eloped with a Negro.” Here’s the complete text of the newspaper article.

ELOPED WITH A NEGRO.

A Maryland Beauty Leaves Her Home
With the Colored Coachman.

Annapolis, MD., July 22. – Dr. Henry Richardson is one of the wealthiest and most successful physicians of this country. He has a handsome country residence in the lower portion of Anne Arundel, and his family has for years been prominent in the state. The doctor is a widower, and his mansion was presided over by a sister-in-law, Miss Helen Owens, 22 years old, highly educated and very popular. She has a tall, lithe form of exquisite grace, immense black eyes, with daintily arched brows, and a great mass of black hair. Her personal attractions were famous throughout the country, and she had many suitors to all of whom she appeared wholly indifferent.

Her own great passion appeared to be horseback riding, and she was to be met mounted on a snow white mare dashing recklessly across fields and jumping fences at all hour of the day year in and year out. When it became known yesterday that this dainty lady, whose haughty pride had become known, was suspected of having eloped with a negro farm hand employed by her brother, very few people would believe it.

To-day the astonishing report was proven to be wholly accurate. The colored farm hand, whose name is Jessie Plater, is a muscular man of fine physique, 28 years old and nearly white. He was known to have the greatest contempt for girls of his own race, and was never seen in company with them. He was always the groom or coachman accompanying Miss Owens.

On Monday night the lady and Plater were both missing. It has been found that they were seen walking down the railroad track late at night, and that they took a train on the Pope Creek railroad to Bowie station, where they changed cars for Washington. The man would readily pass for white with those not knowing him. A telegram has been sent to Washington, asking that they be arrested. The girl’s friends and family claim that she is certainly demented, and refer to the fact that she has an aunt in an insane asylum. The feeling against the negro is intense, and the young men in the neighborhood are talking ominously of a lynching.

Intrigued by the Romeo and Juliet story, I searched for more information.

“A license was taken out at the clerk’s office this afternoon for the marriage of Jesse Plater, colored, and Helen Owens, white, of Anne Arundel county … a crowd followed them to the City Hall, and having obtained the license, they crossed the street to the Office of Justice O’Neal in order that they might be married there. The crowd around the door halloed and laughed and whooped, and the magistrate sent them away from his office without his blessing.”

“Plater took the woman to several magistrates’ offices, but they all declined to marry them.”

“They admit that their intention was matrimony.”

“When they reached the Benning station they were arrested by Officer Prather, of the Washington police force. They were taken to the station and gave their names as Jesse Plater and Ellen Owens, and their ages as 31 and 21 years respectively. The woman states that they left home for the purpose of getting married.”

“She says that the man had been living there some years that they had been courting since January last, and that she intended to marry Jesse at his sister’s house.”

I had to know. Did they make it? The young lovers seemed very determined to tie the knot!

“The pair were married at Benning’s last night.”

“The minister told them that they were foolish to marry, and that each of them had better seek a companion of their own race. But both insisted that the ceremony should be performed. Mrs. Howard, the colored woman, at whose house the minister lived and the marriage took place, also urged them to abandon their matrimonial intent. Miss Owens, however, was bent on it. ‘I want to marry him, and I will marry him.'” When Jesse was remonstrated ‘on the foolishness of marrying outside his race, he answered, “She wants me to marry her, and I’m going to do it.”

At the Police Station – Again

Honeymooning at the police station is not a great way to start a marriage! A few days after marrying, they went to the bank to withdraw money. The bank called the police who “declined to give any advice” and “went away.” But the bank still did not want to let them withdraw money from Helen’s account and further accused Jesse of bigamy. Jesse asserted his first wife died in February.

I understand the drastic change of circumstances.

Before: She with her “snow white mare dashing recklessly across fields and jumping fences at all hour of the day year in and year out,” and the handsome stable hand who cared so well for her beloved horse. I sense the excitement when, as he helped her mount the horse, his strong hand brushes across her thigh. Or she, dismounting with Jesse’s assistance, her breasts press against his muscular chest. Two passionate youths brought together over a horse, plus the added element of secrecy. It was an electric situation!

After: But when they ran away everything changed. The snow white mare at the heart of the relationship was left behind. Helen was no longer living in luxury in her brother-in-law’s mansion. Jesse got a job “working in a brick yard,” and they rented “rooms on F street between Tenth and Eleventh northeast.” That would stress any relationship, not to mention the animosity they were subjected to by both white and black society.

Off in her Head

At the start of the first news article we were told that Helen was “highly educated and very popular.” By the end of the article her “friends and family claim that she is certainly demented.” Each subsequent article introduces another implication that Helen is mentally incompetent. Certainly Demented, Simple Minded, Weak-Minded, Easily Persuaded, Delicate Condition and Insane.

When counseled against marrying Jesse, Mrs. Howard says to Helen, “They say you are insane.” Helen answers, “I am not insane. There has been no insanity in my family, and they cannot show that there has been.” Finally, as the couple split up it is written, “Last Monday, being in delicate condition, she was persuaded by her fellow-tenants to go to the almshouse hospital. By some means her relatives in Maryland learned of this fact, and on Tuesday her sister came from Baltimore and returned with her to that city to place her in a hospital.”

The headline reads, “Tired of Her Colored Husband.” Although an earlier article stated, “They have lived on good terms with each other,” now we’re told they “did not live happily together, and that the separation is the result of their disagreement.” At least this article doesn’t accuse Helen of insanity or Jesse of taking advantage of her.

The End of the Story

Not much more information can be found about Helen and Jesse. We know Jesse married Carrie Laws in 1892 and they were together until his death in 1923. Helen died in 1905, living alone in Washington, D.C., and still using the last name Plater.

And so ends the dramatic elopement story of a reckless rich girl with a passion for the protective young man who wanted only to please her.