Punta Gorda’s Most Famous Ghost is a Teen-Age Girl

Mary Leah Sandlin’s story is legendary in Punta Gorda. The 14-year-old was ironing clothes on the front porch of her family home when she caught on fire. She leapt off the porch and ran down the street engulfed in propellant-fueled flames. Neighbors put out the fire but Mary Leah succumbed to her massive injuries within three hours. It is said her ghost still haunts the historic family home on Retta Esplanade.

For decades the fire-scorched porch planks still showed through no matter how many coats of paint were applied. The boards were finally removed and replaced. Residents of the home since Mary Leah’s death (Smoaks, Hollanders, Wyns) all have reported ongoing paranormal activity including:

It seems as though Mary Leah is trying to warn people to be careful. Other manifestations of Mary Leah are foot steps on the stairs all the way up to the captain’s walk, rattling doors, pressure on the bed as if someone is sitting there, and fires that have started under mysterious circumstances.

Local folklore is clear that Mary Leah died as a result of an accident with the iron, with some accounts explaining that she spilled gas on her dress and caught on fire as she lit the iron, and others saying the iron’s pressure valve malfunctioned or exploded.

Her obituary printed in the The Weekly True Democrat (Tallahassee, Florida) on Friday, Aug 20, 1909 stated she died “from effect of burn received by the explosion of gasoline which occurred when she struck a match to light a patent iron, the heating force of which was gasoline.”

What kind of iron was it?

Mary Leah was using a gas-powered pressing iron, generally called a sad iron. Although this story is sad, sad is an Old English term for dense or solid referring to the weight of a flat iron.

Mary Leah’s iron was a state-of-the-art appliance at the time! It replaced the smoky and sooty charcoal-heated iron, as shown here.

It has been suggested by authors U.S. Cleveland and Lindsey Williams that the Sandlin family purchased a used and possibly defective iron from the local Chinese laundry which had advertised in the Herald “A gasolene self-heated smoothing iron, best thing for family use, for sale cheap at the Chinese laundry next to Windham’s restaurant.”

In my opinion, the family did not buy a used iron from the Chinese laundry. Jim Sandlin was the most successful and prosperous citizen of Punta Gorda until the McAdows arrived. He had an interest in many lucrative businesses, one of which was the mercantile trade. That’s why he had a crow’s nest built on the roof of his home – so he could see ships arriving into the harbor with his goods. His family would have owned a brand-new top-of-the-line iron.

We don’t know exactly what “patent” brand of iron Mary Leah was using, but it probably looked a lot like this one.

This video clip (below) demonstrates how the gas-powered iron was lit. 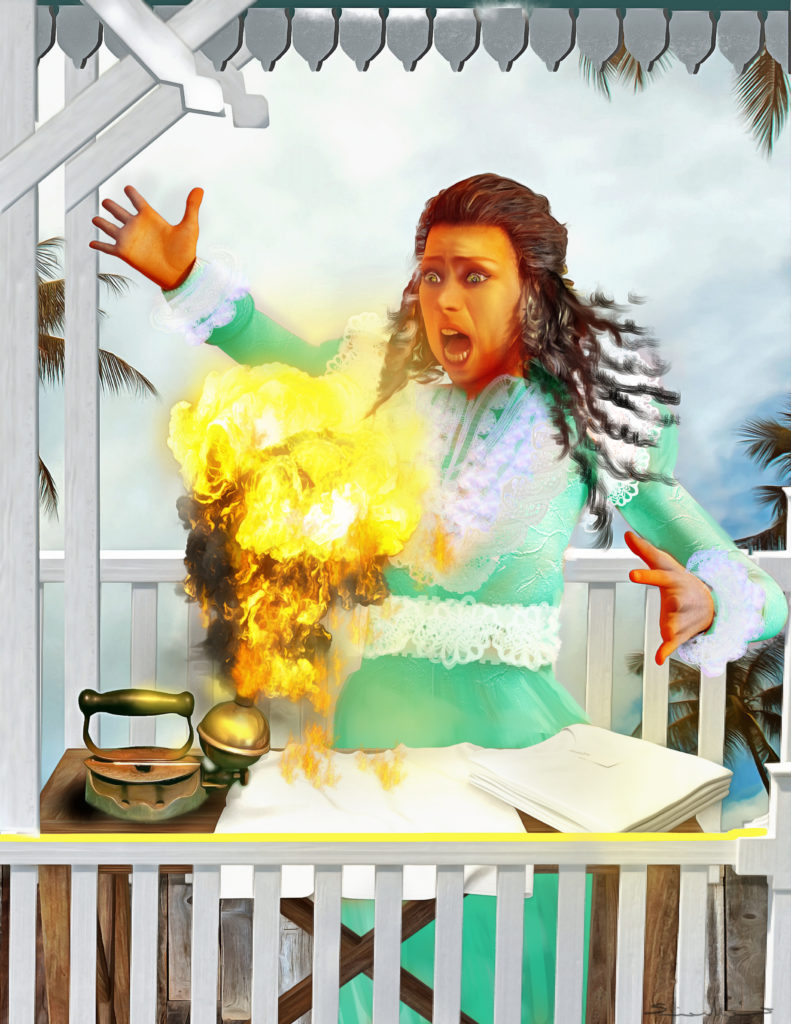 Early Chinese irons were essentially a metal pan with a handle, like a cooking pot. Hot coals heated up the metal pan, and when stroked over fabric, smoothed out wrinkles. The heated metal pans worked better than the glass smoothing stones used by Vikings in Europe.

Early American irons were either heated on a stove or heated internally with coal or charcoal or a slug of hot iron. They were also very heavy weighing between 5 and 15 pounds! Between the heat and the weight, they managed to remove wrinkles from fabric but it was still hard work.

Usually several irons were in use at the same time because they cooled quickly and it was more time-efficient to keep “several irons in the fire”. Women had to be careful not to inhale smoke or drop soot on the clothing. Imagine the misery of ironing clothes in the humid summer heat of Florida!

Before her invention, women had to hold sad irons with a mitt or thick rag because the hot handles burned hands and fingers. Young wife, 19-year-old Mary Florence Webber Potts, or Mrs. Potts, devised an innovative solution which she called a “Cold Handle Sad Iron”. The handle was made of wood and was detachable. The photo (below center) from your author’s personal collection shows the iron without the handle attached. Another revolutionary improvement was the new shape with pointed ends on both sides so the iron could be used in either direction. 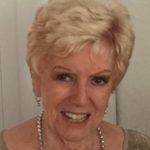 Mary Leah Sandlin’s imagined portrait was painted by a local artist. Originally from Verdun, France, this adventurous lady moved to the US at a young age and lived in Boston for many years before moving to Port Charlotte in 1990.

The dramatic scene of Mary Leah Sandlin’s final minutes was imagined by Simona Molino of Janas Studio Artistico in Italy. Janas is a fairy whose magic flights take her to starry skies and silvery seas. She inspires Simona’s fantasy artwork of memorable characters illustrated in rich colors and scrupulous detail.